Blockbusters Contracts Ltd crews recently undertook a major drainage repair job on the promenade in Hastings, East Sussex. The project on the Warrior Square public toilets required a large excavation in the main A259, which is the main ingress and egress route in to and out of Hastings. 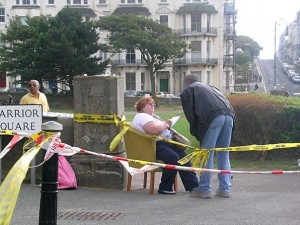 Operated by Hastings Environmental Services department, the Warrior Square toilets suffered a collapse in the drainage system taking waste effluent away from the site. This led to back up in the system which caused sewage from the toilets to spill out onto the promenade and ultimately onto the nearby sea front and beach. This would normally mean a simple repair to fix the collapse and bring the public toilet back on line. However, the major drawback for this site was that the sewage pipe in question lay at a depth of some 5.5 m below the carriage way of the main A259.

On investigating the situation a local contractor deemed that it was not qualified to handle the project and that a contractor qualified to work in the roadway of such a major traffic route would be needed. This was where Blockbusters Contracts Ltd came in. Blockbusters holds all the correct accreditation for working in the public highway and was therefore able to undertake such works.

Investigation of the site by Blockbusters found that the ground conditions above the repair site not were not only comprised by made up spoil including shingle/clay but that the road surface itself was also heavily reinforced.

Senior company managers Tim Hayes and Kevin Began had to come up with a plan to not only make good the repair but to minimise disruption to the main A259 traffic flows. It was decided to employ an extensive traffic management system that was to be manned and manually operated for 12 hours a day throughout the course of the repair project.

The plan was in essence fairly simple, to excavate down to the site of the pipe damage to a depth of around 6 m and repair the pipeline. This was achieved using a 3.5 m x 3.5 m square excavation. The plan was to then back fill the hole according to current standards and reinstate the road to the highest standard possible.

The works commenced on 17 June 2013 and were completed with the public toilets back in use by 2 July 2013. Blockbusters was under instruction to complete the operation using a 12 hour day shift pattern, so a split shift system was put in place to ensure the works were completed in the time frame allowed.

Mel Weir, Hastings Environmental Services Project Officer, said of the project: “Doing business with the Blockbusters team was uncomplicated and straightforward. Although we were all under a fair amount of pressure during the works everything was kept to programme and the outcome will make this site easier to maintain in the future.”

All the works were completed well in time for the busy St Leonard’s Festival on 13 July.